Appearance – Poured a dark brown with some red hues around the edges of the glass.  A nice white head but was gone rather quickly.

Smell – The smell was really hard to pick up.  All the scents were very minimal.  There was a slight milk chocolate smell with some roasted notes but again they were really hard to get.  Some might find other smells in there.  I didn’t

Taste – Very light on the body and little sweet chocolate taste and a small roasted background to it.  Nothing intense but also not that stood out.

I had Highland’s Gaelic Ale at a pub beer and wasn’t impressed at all with it.  But I spotted this one on the shelf and thought I’d give it a try.  I was quite a deal disappointed.  I didn’t get much in the way of smell or flavor with it.  After trying it I read some reviews on how some people loved it and it has a nice bold taste.  I just didn’t get that in either bottle I had.  Unless the whole batch was bad I just can’t see it. 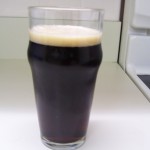