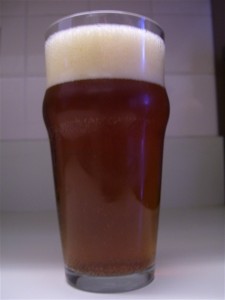 Ah the joys of being a beer blogger.  Sometimes life just gets in the way of trying to accomplish what you want to do.  Case in point is trying to finish off the review of the Sam Adams Latitude 48 Deconstructed pack last week.  Friday morning I was just exhausted and didn’t feel the urge to write up a review.  Saturday I was pretty busy all day.  So I just pushed it back to the start of this week.

Here is the next to last one in the series and it’s Hallertau Mittelfrueh.  This hop is probably Boston Beer’s most commonly used beer.  It is a noble hop that they seem to be huge fans of.  I too really like this variety.  Let’s see how it stands in a beer by itself.

As is becoming common for this series I use my nonic pint glass.  It like all the others pours a very clear orange color.  A good sized white head sits atop the beer and leaves a good amount of lacing as it subsides.

The aroma has a bunch of citrus hop aroma mixed with grassy, earthy aromas as well.  Maybe a very slight malt smell but not a lot.

The taste is actually pretty complex.  It’s hoppy with hints of citrus.  It’s grainy.  And it has a biscuit and malt backing to it.  It is also quite floral in taste as well.  The bitterness of the hops and the flower like taste linger around quite a bit after the taste.

Well this is definitely the most complex tasting out of the group so far.  It has a lot of flavor to it but the floral like aftertaste is a bit annoying.  I wouldn’t mind it if it were more citrus in nature but the slight taste of dandelions is not one I particularly like just lingering around in my mouth. 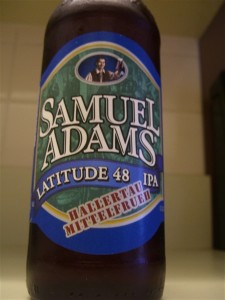 Well that is now 4 down and 1 to go on the Deconstructed pack.  I’ll be back tomorrow for the review of the final one, Simcoe.  Hope you don’t suffer too much from the Mondays.