Smell – Roasted malts and coffee are the main smells I pick up but you do get a bit of oats and a little boozey whiff of the alcohol at the end.

Taste – Roasted malts as you expect and then the coffee and oats balance each other out very nicely so one doesn’t dominate more than the other.  Add in a bit of chocolate for a very nice taste.  The alcohol has a bite at the end to it that becomes more prominent as it warms up some.

This has been one that I have been wanting to try for awhile but always pass over it for something else.  Finally I picked it up and gave it a try.  I am glad I did.  A very well rounded stout all together.  It may have a bit more of a coffee taste than I normally care for but it was not overbearing at all. 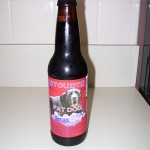 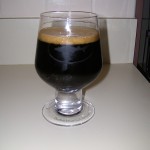