Fun fact that you may not know.  Well you should know if you frequent this site because it is written on the About page, so come on!  But Samuel Smith was the first craft brewery of sorts that I ever had.  It feels like many years ago in Newtown, PA when I had the Oatmeal Stout for the first time.  It just blew my mine and ever since I’ve felt this allegiance to Sam Smith sort of like I do for Yuengling.

Today I’m doing my first review of a Sam Smith beer in a while.  I’m having Yorkshire Stingo.  It is an 8% ABV English strong ale that they age in oak casks for a year.  These barrels, according to their site, range in different ages.  Some are quite old even.  And this seems to be against what most breweries do with barrels now and days.  Usually they use it two times then they get new ones to keep better control of the affect the barrels have on the beer.

I pour the beer into my nonic pint and it arrives in the glass a very deep red color.  A very thin and bubbly head sits on top of the liquid for just a few seconds before it is gone.  I’m kind of lucky to have gotten the picture of it.

The nose just punches you in the face.  Lots of cherries and other dark fruits.  You get a distinct character of vanilla and oak.  Then the alcohol subtly stings the nostrils.

The taste follows suit with a complex taste.  More dark fruit upfront that turns earthy.  Follow this up with more oak quality and a very warming alcohol taste.  The alcohol becomes even more apparent as it warms up.  It kind of reminds me of a brandy or Scotch at points.

This is an amazingly complex beer.  There is just so much going on in the glass.  It really did make me think of a lot of spirit qualities as I was drinking it.  This was a slow sipper for sure.

My only problem really with this was the price tag.  It seemed a bit high to me at around $10 for 550 ml bottle.  I know it is a special limited release but that was the reason I didn’t buy a second to try to age.  Who knows maybe I still will. 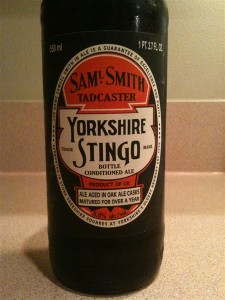 But as for the beer itself I was once again quite happy with Yorkshire’s largest brewery.  They make very good quality beers that are to style.  This one is a little more out there for them traditionally but they did a great job with it.  If you want a special occasion beer to sip on then this is for you.