The Porch was the first place all my friends told me I needed to check out when going to Key West.  And who am I to not take their advice?  Oh yeah, MikeLovesBeer!  That’s right!  So after a busy late morning into early afternoon Melinda and I headed over to the corner of Duval and Caroline and see the big plantation style house sitting on the corner.  It’s quite an awesome looking building if I do say so myself.  Walk up the path to the steps leading to the porch (the literal one on the front of the building) and through the front door.  In the hallway just turn to your left and go through door #2 and you have arrived. 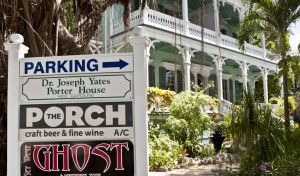 We sat at the bar and took a look at their chalkboard lists.  About 12 beers on tap and a helluva lot of bottles.  Some cool things graced the taps including Cigar City Marshal Zhukov, Tequesta Oaked Wee Heavy and Dogfish Head Chateau Jiahu.  I went for the Oaked Wee Heavy while Melinda had the Chateau Jiahu.

We enjoyed sitting at the bar with a few locals and another couple that was visiting.  A lot of cool artwork on the walls including many Star Wars centric pieces (big plus in my book).  Then we spotted something on the chalkboard called an Angry Munchkin.  We inquired with the bartender as to what it was and she informed us it is a shot of sake dropped into Magic Hat #9.  Melinda being slightly more daring than I decided to try it.  In her words it was “interesting.”

We had a couple more before heading out to get some food.  They don’t server food but allow you to bring in your own food or order delivery from any local establishments.  We saw someone eating a massive burrito and asked where it was from.  So we went to Amigos to enjoy a burrito.

Their pricing was on point for the most part.  A couple things were more expensive than normal but they did put some beers in pint glasses that normally aren’t in them.  So you got more of it.  So in that case I can understand the tad extra.

We enjoyed it enough to go back the following afternoon as well and enjoy a few more.  I would have to say it was my favorite beer spot of the vacation.  Great setting, laid back atmosphere and good beers on tap.  A must see in Key West.