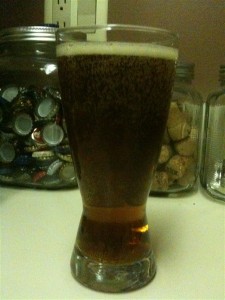 Trading beer is fun.  Now I don’t take it nearly as seriously as some of my friends that are constantly bringing in and sending out new things each week.  But I mostly just work off of Twitter where people I follow ask me about things I have.

The beer I have today was part of a recent trade where I sent some Cigar City stuff for a bunch of Wisconsin favorites.  This is part of New Glarus’ Unplugged Series.  This is the Smoked Rye Ale.  I love me rye and I like  me smoke.

I decided to bust out a glass I haven’t used in awhile for this one.  It’s a Bavarian style pils glass.  It pours a really clear copper color, a lot like a penny.  There is a small white head but it is gone pretty fast.

Big time smoke on the nose.  Nice bacon like aroma in there with some hints of wood, caramel and a very small bit of rye.

Lots of peat smoke and wood in the taste.  There is some malt backing to it that sweetens things up a bit.  This beer, for being as smoky as it is, is incredibly smooth.

So did I enjoy this beer?  You bet I did.  But are there any problems?  Yes there is.  There are not more of it for me to enjoy.  Awesome beer that would make for great drinking this summer while BBQing outside.

For those of you that can get New Glarus (only those in Wisconsin) you are lucky folks.  You probably already know about this gem of brewery.  But if you didn’t you better get to know them. 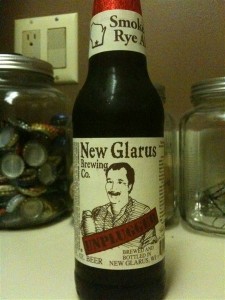 Apologies for the images.  The batteries on my camera died without any backups.  So I had to resort to the worst camera phone in the world.

Oh and one last note: Dave from the Drunken Polack, don’t think I haven’t forgotten about you.  I have picked up some CCB bottles specifically for you.  I’ll hit you up with an email soon.