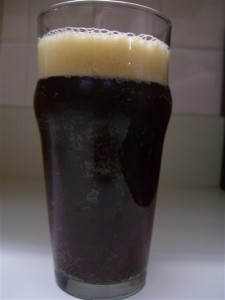 March Madness is roaring on and boy is it mad this year.  Many people throwing out their brackets after just the first round.  I admit that Morehead State and VCU messed with me a bit but what hurt me most was my underdog picks that couldn’t pull off the wins.

Well luckily United We Drink (cheap plug) will be having our own tournament on this week’s episode.  Be sure to tune in on Friday for the most epic beer tournament you will ever see.

Yakima Glory debuted in late 2009 in small batches around the Philly area as Yakima Twilight.  But in 2010 more was made and the name was changed.  The Black IPA (yes I like that name compared to Cascadian Dark Ale) was something I was lucky enough to try at Victory’s brew pub in 2009 and I was happy to see it on a wide distribution this time around.

The cap is popped and I pour the brew into my nonic pint glass.  The color is a lot like a cola, even the head that forms.  There are some red hues to the color along the edges of the glass.  And it leaves a good lacing as the foam dissipates.

The smell is big on resiny, dank hops.  I can pick up some cherry scents as well as a little roastiness but man those hops are strong.

The first sip is quite bitter.  A ton of hops hitting you and then the roasted malt flavor comes in.  You get some caramel and sweet malts but the hops just take over again.  It finishes bitter and the taste lingers around on your tongue for a couple minutes.

Either I’m crazy or I just don’t remember this brew being this hoppy when I first had it.  The mixing of the hops and roasted malt flavors fits the style great but the hops definitely stand out more. 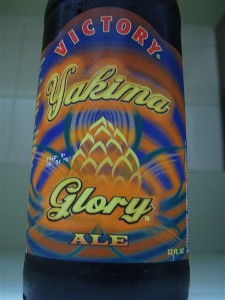 While I enjoyed the beer I couldn’t have more than one in a sitting.  I actually had two bottles and saved the second for another time.

This is probably one of the more intense Black IPAs I’ve had.  And if you like the style you better pick this up before they are all gone since it won’t be back until late in the year.