It is the start of the new week.  This can be good or bad depending on the person.  Many suffer from what is called a case of the “Mondays.”  But where I come from you get your ass kicked for saying something like that.

But for me it should be a good week.  Firstly I am back at Dos Beerigos site as the guest blogger this week.  This will mark my third time teaming up on the blog with Phil to review brews.

Secondly I have decided to dedicate this week on my blog to a brewery that in it’s short time of existence has taken the craft beer world by storm and helped establish Florida as not just another state anymore.  That brewery is none other than Cigar City Brewing.  So each day this week you will get a review of a different Cigar City brew.  And what do you know, I have one right here for you.

Jose Marti is an America Porter that CCB released last year.  At the time it was unknown if it was going to be a seasonal, one time or regular brew.  After it’s success across the state it appears to have gotten the nod as a semi regular brew.  Pretty much they will brew it through out the year but not as regularly as the two main regulars (Jai Alai and Maduro).

A recent trip to Sarasota for a #FlaBrew meet up (I’m going to try to get an article on that up soon) took us also to the Sarasota branch of Total Wine and More.  There I picked up a number of Cigar City brews that haven’t quit made it south yet.  Jose Marti was one of those beers.

So I cracked off the cap and poured the pretty much all black beer into my Cigar City snifter.  It made a good sized light brown head atop the brew.

The smell was a mix of coffee, vanilla, cocoa and roasted malts.  The coffee scent is a bit more prominent than I like for my taste because well, I don’t like coffee.  But we move on.

The taste is much of the same as the smell.  You know by now I hate saying that because it translates so wonderfully to text when writing (end sarcasm).  But it really is a big blend of the flavors that were present in the taste.  The coffee taste has a bitterness to it though.  It is kind of like a mix of bittersweet chocolate and coffee.  The body is not that heavy at all and makes it pretty easy to drink. 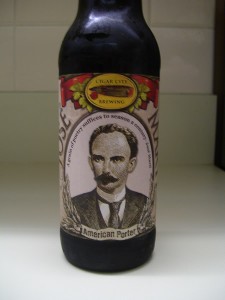 So how was Jose Marti overall?  Did I hate it because of the strong coffee qualities?  No not at all.  I actually didn’t even find them terribly strong.  Yes there is a definite coffee smell and taste to it but it is not like a Terrapin Wake n Bake or Southern Tier Jahvah.  The cocoa and vanilla flavors balance it out to make it drink easier.

So that makes one brew down and 4 more to go this week.  Are you looking forward to all this Cigar City goodness?  I sure am.