After another busy day in beautiful Colorado we awoke early once again.  But this time with a purpose.  That purpose was to be at the Cheeky Monk for Breakfast with the Bruery.  The Bruery is one of my favorite breweries right now so I was not going to miss this especially since the Cheeky Monk was only a few blocks from our hotel.

We planned to get there early as there were no tickets or reservations.  So right around 8 in the morning we got there and there was absolutely no one there.  This was the only time on the trip that being early wasn’t really a great thing.  So we walked around for a bit and came back about 10 minutes before 9.  There were about 10 people out front by then and we figured this is not going to be that big of an event after all.

Once in we had our drink orders taken.  We were all quite bummed that the planned Hottenroth mimosas were subbed out for White Orchard mimosas.  The keg of Hottenroth had kicked the night before and some last minute switching needed to be done.  Being that White Orchard is probably the only Bruery beer that I don’t really care for I was extra disappointed.  But that didn’t last long as they also had a new brew from the Orange County brewers on tap, Seven Grain Saison.  I opted for that.

For actual breakfast I decided to get a Denver omlette.  When in Rome.  And as good as it was I was instantly regretting my choice when I saw the French Toast and Belgian Waffles that Amie and Phil got respectively.  They allowed me to try each of their dishes and I began plotted an ol’ switcheroo.  But I don’t that wouldn’t have worked well and ultimately decided against it.

We got to talk with Jonas from the Bruery for quite awhile about a number of topics.  We were so happy that he was honest and took the time to actually answer our questions.

He stated that they would be brewing Hottenroth again when they have the chance too.  They have just been to capacity with other beers that it hasn’t been able to be done yet.

The long talked about collaboration with Cigar City will be out early in 2011 probably.  It is a big sour beer and that was the reason for the wait.  Also Florida and California will be the main focuses of the distribution of the brew as that is the home bases of each brewer.

Three French Hens for this winter seasonal will be a dark Belgian ale that is aged on French oak.  I was wondering how they would fit something French into the beer and there you go.

After breakfast we talked about bit with Patrick Rue himself and got some photo ops.  He is a quiet guy but obviously loves the business.  He told us that they would be having Oude Tart at their table for the sessions that day and to say that put a smile on our faces would be an understatement. 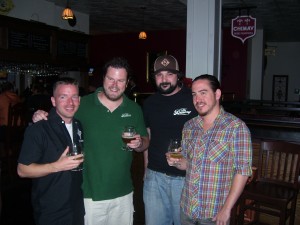 Yes I'm the only one looking at the correct camera. And yes I was a fan boy wearing the Bruery shirt.

So then we headed back to the hotel and rested for a bit before getting shuttle over to the convention center for the AHA Members Great American Beer Festival session.  We figured one and a half hours early would be a good time.  Wow the line was still pretty damn long with that much time before the event.  I would say there was a few hundred people in front of us.  But I have a history of not judging amounts of people correctly.  If anyone from our group wants to give their thoughts please do so.

Once the doors opened we were herded like cattle through the ID process, getting a wristband and walking up the stairs to the main floor.  All the while bagpipers are playing and I can’t help but think Rowdy Roddy Piper is here to kick ass and drink craft beer.  But he isn’t going to be out of beer.

Once inside we grabbed our glasses and off we went.

I won’t go through the pains of listing every single step we took but here is just a few of the brews that I really enjoyed.

Also during the course of the event we ran into a few guys that recognized us from our flight into Denver.  They are from South Florida as well and we BSed with them for awhile.  Really awesome guys but as was the theme of the trip we don’t remember any of their names.  So here is a picture of us all together.  If you know these fellas or you are them, hit me up.  We want to go out for some brews with you guys! 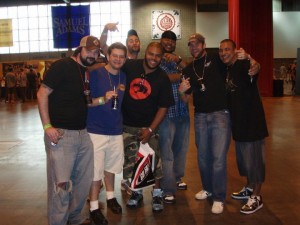 So around four we were about ready to go.  We bought some shirts.  (Ed almost bought a purple females shirt because he’s colorblind.  Good times.)  Then we took a cab to Stranahan’s Colorado Whiskey.  While Ed, Tony and Amie took a tour of the distillery Phil, Cory and myself had some late lunch/dinner in their pub, Rackhouse Pub.  They had an all you can eat corned beef and cabbage that Phil and I jumped all over.  It also entitled us to two whiskeys or two Left Hand Milk Stouts.  All this was only $15.  Talk about a deal.

We watched a bagpiper band play as people were celebrating half way to St. Patty’s Day and our waitress Amelia was absolutely awesome.

After eating we took a hilarious cab ride back to the hotel.  Our cab driver corrected us that where we were staying was not downtown but where the “whores” are.  Needless to say this would later make Phil believe that every woman walking around at night was a street walker.  More on that in a bit.

So we relaxed in our room for a little while.  We watched some college football and I adjusted my Fantasy Football team for the following day.  We then head down the road to a bar we saw called Uptown Brothers.  They were a sports bar but with awesome beer on tap.  We had a few beers and some appetizers but it was when Phil turned to liquor is when things got interesting.

The walk back to the hotel involved him questioning that every girl he saw was a lady of the night.  Then when we passed a venue letting out from a George Thorogood concert I think he went into overload.  But luckily we made it back to our room without incident and decided to call it a night.  Well not before Phil opened up the window to yell, “Are you a street walker!”  Ah we love that kid.