Thursday morning was not like other mornings.  If anything it could be compared to Christmas but I’m going to go beyond that and say it was much better.  Four craft beer lovers from South Florida arrived at Fort Lauderdale International Airport with only one destination in mind, Colorado.  Phil barely got any sleep like a little kid on Christmas Eve eagerly awaiting the moment to open his presents.  Ed had his itinerary in pocket and dress shirt and slacks on and ready to start the adventure.  Cory was going for business and fun.  And myself?  I knew it would be a great four days.

Our flight had many more beer lovers than we expected.  Chris from Fresh Beer along with reps from Gold Coast were on the same Southwest 737 as us.  There were some familiar faces from local beer events as well.  And as we found out later even more craft beer lovers on this plane.  Ed joked that if something happened to this flight it would set craft beer in South Florida back about 10 years.  Good thing no air marshals heard that or this trip may not have happened.

We arrived around 11 am local time in Denver and picked up our car.  Cory had some business to tend to and got his own car and would meet up with us later.  Chris joined us en route to our first stop of the day at Avery Brewing Company in Boulder. 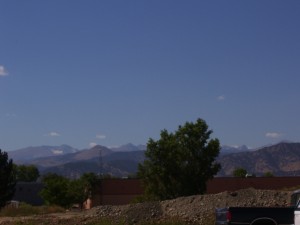 Avery is tucked away in an industrial park just on the outside edges of Boulder.  The road through the area is bumpy with plenty of pot holes but eventually we saw the crowd of people gathered outside of the tasting room.  The smell of BBQ being smoked went perfectly with the mountainous landscape to the west.  And inside we ordered our first of many beers for the next four days.  Avery Voltron, a one off sour that was expecting to be gone by the end of the day.  It was as tart and amazing as we had hoped for.

As hunger set on we decided to buy some tacos from a guy outside from a local eatery called Snappa.  To call these tacos heavenly would be doing them no justice.  Absolutely amazing. 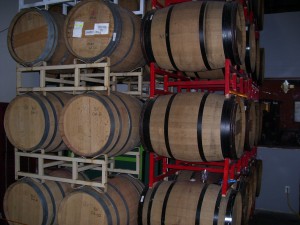 Soon Adam and Ray from Fresh Beer arrived and provided us with wristbands to get access to the Avery barrel room where they were serving the BBQ food as well as some impressive brews not in the regular tasting room.  As I loaded my plate with pulled pork and brisket we sampled the special beers.  They were all a base brown ale aged in different barrels.  One aged in a bourbon barrel, another whiskey and a third rum.  The whiskey one was my favorite as it’s no secret I’m not crazy about bourbon aged beers.  The rum also didn’t seem to come through as much on it’s version.  The whiskey one seemed just right.  Enough of the base beer with a little wood from the barrel and a little taste of the booze.

I could have stayed at Avery all day but alas we had much to do on this first day.  Chris had to be back in Denver for his GABF session so he left with some other people.  Our group became three for the rest of the afternoon.  So after a quick stop at a local beer store in Boulder we set out north to Fort Collins. 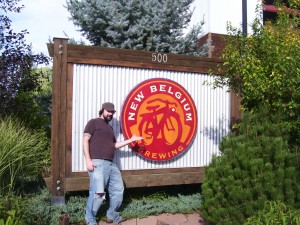 We arrived at New Belgium amazed by the size of the entire establishment.  This is by far one of the biggest craft breweries my eyes have ever seen.  With our tour scheduled for 4:30 and a little time to kill we had a beer in the tasting room.  The payment system at the tasting room is they do not take money.  You get 3 chips that entitle you 3 samples for free.  The bartenders did not even seem to be accepting tips.  I tried the Lips of Faith Imperial Berliner Weisse.  I was a bit let down as it wasn’t nearly as sour and tart as I expected.  The alcohol really came through which is strange for the style.  But oh well I got to try it.

Our tour was really nice and our tour guide Kaitlyn was very good at explaining all the aspects of the brewery despite only being employed at New Belgium since June.  She’s a quick learner I guess.  Along the tour we got to sample a number of NB brews including Abbey, Sunshine, La Folie and Fat Tire.  I would go into more details but Ed has a wonderful write up on the whole order that will be posted here tomorrow, so look out for that.  After our tour we had to skip having more samples at the tasting room in order to get to our next destination, Odell Brewing Company. 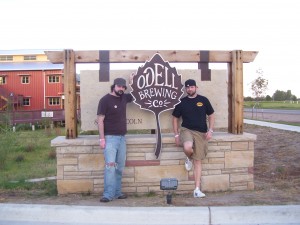 I have heard so much about this brewery but have never really had much from them as they aren’t available in our neck of the woods.  So I was really excited about trying their stuff.  The outside of their brewery was very impressive as well.  I said it reminded me of a mini version of New Belgium because it was very nice on the eyes.  The tasting room too was very nice and covered in wood.

We started things off with one of each of their flights.  Each flight had 6 different beers for a total of 12 little treats.  And get this for the price.  Four dollars each.  If you have an AHA membership you get half off so we in theory only paid for one flight.  Now for the beers themselves I really enjoyed 5 Barrel Pale Ale and their IPA offering but I was absolutely blown away by Wanderer.  It is I’m assuming an imperial version of a Marzen.  This was incredible!  I got some very nice apple cobbler like tastes from it.  Considering I can’t find details of this beer on their site as well as the major beer sites I’m going to guess this is a brewery only beer.  So if you are in the area I say go there now and try that beer.

After we finished our flights we wanted to try a couple other beers, Saboteur and the Bourbon Barrel Stout.  The barkeep was nice enough to just give us samples on the house.  Awesome staff there.  Saboteur was amazing as I expected.  Nice sour and tartness there.  The Bourbon Barrel Stout was very good as well and the bourbon was not overboard which is why I liked it.  But alas it was time to head back to Denver.

With one more stop for beer shopping while in Fort Collins we drove back and checked into our hotel.  We met Cory back there and had dinner across the street at an Irish pub.  We then went back to the hotel and called it a night as Friday held a lot more in store for us.