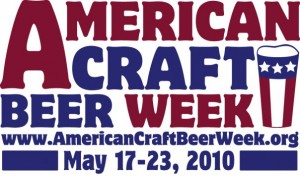 Be sure to check out the Beer Events page as I have updated it with many of the events that will happen.  There are numerous sampling nights with breweries including Cigar City, Avery, Southern Tier, Dogfish Head, Harpoon, Shipyard.  There are two huge beer dinners including one in Jupiter and another in Lake Worth.  You can’t miss out on the festivities.

Have a good American Craft Beer Week all and be safe out there.

Beer and Food Sampling Tomorrow at The Living Room