Appearance – Poured and extremely cloudy orange color.  You can see the yeast floating around in it.  Frothy white head that stuck around for a little bit and left lacing on the glass.

Smell – The yeast is the most predominant smell here.  You pick it up right away.  There is also some lemon undertones along with grassy notes.

Taste – Funky to say the least but that’s the way it’s suppose to be.  Big dry yeast flavor that is very tart.  Sour apple, lemons and spices round this out.

Another of the brews I picked up while in Orlando, this is my second Jolly Pumpkin brew.  I didn’t know until the store clerk told me that all of their beers have a sour style to them.  So then it was no surprise that this one as did Bam Noire had very tart characteristics to it.  This one will not be for everyone because of the sour profile but I really enjoyed it. 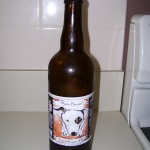 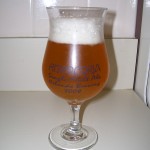