Taste – A sweet lemony taste up front with a hint of honey.  Finishes with a wheat and pepper taste to it.

It feels like only a few weeks ago that Sam Adams released the White Ale seasonal and now the Summer Ale is on the shelves in the second week of April.  If this holds true I am expecting Octoberfest on the shelves in July.  No exceptions Sam!  I didn’t really mean to have to wheat beers in a row that is just how I picked them out of the fringe really.  This is pretty good one.  I like the taste of lemon instead of oranges that most wheats tend to have.  The pepper taste throws it off a bit but it makes for something interesting. 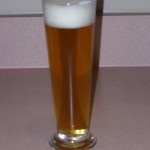 So Thank You Music Ginger Wheat