Appearance – A very hazy, copper color with a very small off white head.

Smell – The smell was very sweet and hoppy with smell of fruit and molasses. Plus you can tell by the smell that this is a strong beer. You get that kind of alcohol smell along with it.

Taste – Very thick and full taste. It tastes pretty much with the smell. It was very hoppy with a bit of a fruitiness to it.

I’ve noticed this beer numerous times when going to the store and never understood why it was $9 a bottle until now. The process to make the beer is impressive and add that with a 20% ABV you are getting your money’s worth. This is definitely a slow drinking beer that you are suppose enjoy the taste of. I do not see being able to drink more than maybe two in a sitting as possibility. While I enjoyed it a lot it is just so rich and filling. Plus with that high ABV you will start feeling it after just one bottle. I had no idea of the level when drinking it and definitely started feeling it afterwards. I have to say that is by far the best IPA I have had to date. 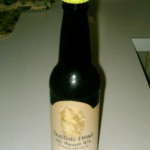 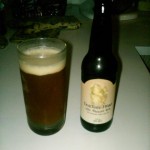