Appearance – Poured a golden yellow color with really no head at all.  My second bottle poured with a little more of a head but was disappointed in that.  Maybe it was the glass, I don’t know.

Smell – Sweet hoppy smell.  For some reason I could almost smell apples I thought.

Taste – Toasted malt flavor that was kind of like bread.  It went down more bitter than most pale ales I’ve had.

I’ve been on this pale ale kick lately as they seem to be really good at quenching one’s thirst on a hot day but this one left a lot to be desired with.  I can honestly say I was disappointed.  I expected something better from the fine folks at Fuller Smith and Turner based on some of their other brews.  While not horrible it was definitely not one of the best pale ales I’ve had. 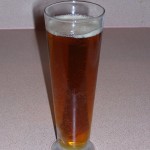